It seems that the affection that many prominent monarchists in Canada have for Queen Elizabeth II is not as deep as they make it seem – and I mean that literally.

This became clear earlier this week as Canadian Prime Minister Justin Trudeau announced that the 19th of September will be a national holiday in remembrance of “one of my favourite people in the world,” who had just passed away.

Trudeau said that his country, Canada, was “in grief.” It’s safe to assume that the passing of a 96-year-old English queen has caused the majority of Canadians to give thought to the topic for at least a few moments. But I haven’t seen any indication that Canada has been overcome with sorrow or wondering what will become of us now that her unremarkable son Charles, who is 73 years old, is king.

Instead, it seems like people in Canada are carrying on with life as usual, with all of its ups and downs, joys and sorrows, and daily responsibilities, as far as I can tell from my vantage point, which is admittedly more conservative.

In the meanwhile, despite the sadness that was produced by the media, there was a pleasant surprise in the form of the potential that the whole nation would have an unexpected vacation on the eve of summer’s end.

And yet, I couldn’t help but feel like I’d been duped. The fabled “motherland” of the British Isles, Great Britain, will be spending ten days commemorating the seven decades of the queen’s reign. In light of everything else, one little day appears, at best, inconsiderate and, at worst, like a bargain for the throne.

Despite the gushy, round-the-clock coverage by reverent, black-clad personality types that have been going endlessly on and on about the touching glimpse of her late majesty’s devout, thankful subjects standing in lengthy, winding queues, a good proportion of British people would reportedly prefer to watch football rather than a funeral, either at home or in a pub.

Sadly, the “holiday” that Trudeau declared to provide Canadians who have lost a loved one the chance to grieve came with certain restrictions, which makes the whole thing seem like an oxymoron to me. Only employees of the federal government would be given the day off to watch a group of feuding princes and princesses, as well as a man suspected of being a serial sex offender, say their last goodbyes to mother dearest in front of a television with a high-resolution screen and a wide screen.

Related: Trudeau is Dishonest and Dishonorable

Unfortunately, Ontario Premier Doug Ford, who has been dubbed a “populist” by the media but has once again shown that he is not the “people’s champion” but a fatuous hypocrite, did not take the time to heed the cogent argument presented by the irritated monarchist.

Here is a video of Henry Ford expressing his regret at the conclusion of “a magnificent life” while reading off a teleprompter with all the emotion of a mannequin.

Ford stuttered as he attempted to say, “During the course of her historic reign,” “she taught us the real meaning of unselfish devotion.” Ford continued, “She was revered and appreciated for her sense of responsibility and dedication to charity.”

According to Ford’s standards, the affluent, dysfunctional mother of a clan of scheming dilettantes bred into position and luxury was the revered and beloved ideal of dedication and duty.

How exactly did this red-blooded Conservative intend to pay tribute to the “selfless” commitment that a dearly departed blue-blood had shown to Canada and the world? As was to be expected, he prioritised financial gain above loyalty to the king.

Ford may have followed Trudeau’s generous example and given the queen’s heartbroken legion of the working-class fan base in the province a shift-free opportunity not only to bid Elizabeth adieu but to wave a mini Union Jack in sad solidarity. This is something that we are reliably informed of, of course, even by the monarchy-adoring tabloid press. However, Ford chose not to follow Trudeau’s example.

While Doug “everyman” Ford decided to offer the royal family his stilted deepest sympathies, the callous misanthropes now at the Canadian Federation of Independent Agency issued a plea urging province officials to fight back the populist temptation to declare September 19 “a statutory paid holiday.” This happened at the same time that Doug “everyman” Ford offered the royals his stilted condolences.

I am aware that making a reference to Christmas in October or November may be a little premature. Despite this, it is hard to resist. Dan Kelly, the unaffected president of the federation, yelled “Bah humbug!” in a manner that channelled the deliciously frank sentiments of Ebenezer Scrooge.

Corporatists are not sentimentalists for 365 days. 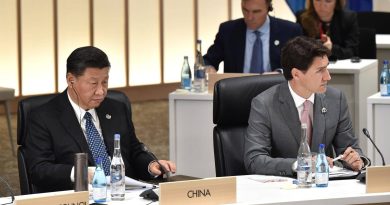 Chinese Intervention in the Internal Affairs of Canada